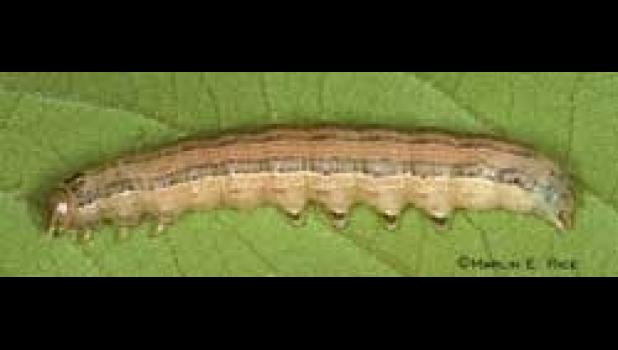 Much of the armyworm damage has occurred in counties that have pastureland. There are several resources at the University of Missouri Extension website, which can help you with the identification and understanding of this pest. These resources can be found at https://ipm.missouri.edu/IPCM/.

The phone has been ringing regarding armyworm damage. Calls have been from most all counties in northwest Missouri. Growers should actively scout grass pastures for this pest.

Scouting is best conducted late in evening or early morning because the worms typically feed at night. Worms will attack grass pastures, winter wheat and corn.

Armyworm attack and defoliate grass plants. There are two to three generations per year with most damage occurring from this pest in May and June.

Larvae feed for 3 to 4 weeks, however, eighty percent of the damage occurs during the last 5 days of larval feeding. When all food is consumed, the larvae will move to a different site giving the appearance of moving in hordes.

During the day, larvae will be curled up under the ground litter in pastures during the day. Economic threshold is four worms per square foot in pasture.

In pastures, there are insecticide products which labels indicate that animals do not have to be removed from the area of insecticide application. These are safe insecticides or would not have this labeling. In addition, some insecticides are less expensive but may not provide level of control desired. Check with your local dealer and ask for their experience.

Be sure to use a sufficient amount of water as carrier also to get good coverage of the insecticide to the worm. Dense grass canopies may hinder insecticide reaching the larvae. Also, larger worms are harder to control than smaller worms. If possible, spray as dusk or night may provide better control as worms will be on plants and will be more likely to encounter the insecticide.