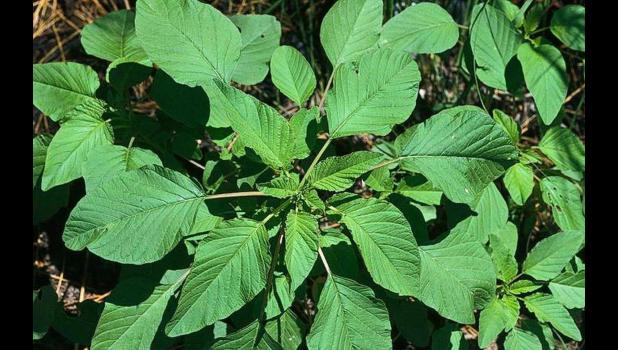 Its cousin waterhemp remains top weed in state, but likely not for long.

They are like ugly distant cousins at a family reunion. They look alike until you see them side by side. Their differences become apparent upon closer examination.

Palmer amaranth is the bigger bully of the two. It takes over fields, choking out crops and profits.

The ugly cousins from the pigweed family are in a footrace for first place. Waterhemp remains Missouri’s top weed—for now. Palmer amaranth is nipping at its heels.

Palmer amaranth is the No. 1 weed to watch, says University of Missouri Extension weed scientist Kevin Bradley. It invades more Missouri counties each year. It is growing at alarming rates in neighboring states.

“Season-long competition by Palmer amaranth at 2.5 plants per foot of row can reduce soybean yield by as much as 79 percent,” Bradley says.

Before 2008, Palmer amaranth appeared only in the Missouri Bootheel. Each year, including 2016, it spread to about five more counties.

Palmer amaranth’s leaves look like a poinsettia’s. It is bigger, bushier and has more spines than waterhemp. Mature plants tower over waterhemp and row crops. When it goes to seed, Palmer amaranth stands out. It is twice as competitive as waterhemp and can produce as many as 1 million seeds per plant.

Farmers should be on the lookout for Palmer amaranth this spring. “Be vigilant,” Bradley says, and respond quickly.

Consider cultural practices for weed control, he says. Do not rely solely on herbicides. Narrow row spacing of crops, cover crops and harvest weed seed management are means of control.

Harvesting-equipment manufacturers from Australia invented a machine known as the Harrington seed destructor, which collects weed seeds instead of discharging them back onto the soil. In five years we could see these machines as a compartmentalized option in combines in the U.S., Bradley says.

Meanwhile, Bradley and his graduate students conduct other experiments to look for new weed control methods. They expect to compile data this year from one project. They made a metal chute that discharges seed and residue from the combine into windrows. Students burned the windrow containing weed seed with a propane torch to destroy seeds.

In the meantime, Bradley recommends that farmers use multiple modes of herbicides to control Palmer amaranth. Use full rates on soybean. Overlap residual herbicides. The glufosinate and LibertyLink soybean system still works.

To learn more about Palmer amaranth and other weeds, go to weedscience.missouri.edu. You can also download the free ID Weeds app at weedid.missouri.edu. Find MU weed science information on Facebook at Mizzou Weed Science and @ShowMeWeeds on Twitter.