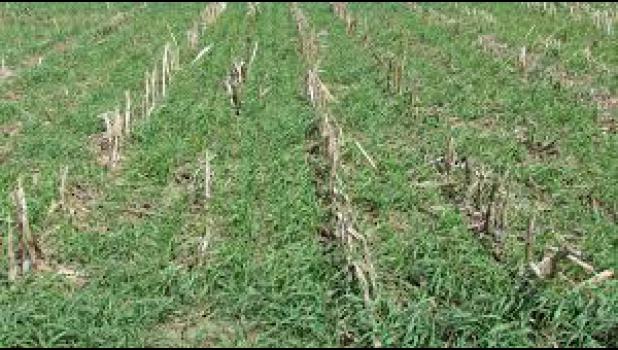 COLUMBIA, Mo. – Fungus-infected wheat not bought by grain elevators at harvest may have use as seed for cover crop to protect soil over winter.

Veterinary toxicologists at the University of Missouri see the possibilities in planting the rejected crop.

On animal health, Tim Evans, DVM toxicologist, said he sees nothing in the life cycle of the small-grain fungus that would prevent using the seed for cover crop.

However, germination of the seed could be reduced, he added.

Bill Wiebold, MU agronomist, agreed. “Like many problems this year, we’ve never been here before. We don’t have research to answer questions raised by record-setting wet weather.”

Wet weather during flowering and seed set of small grains caused multiple types of fungus to create mycotoxins in the wheat crop.

“Vomitoxin gets attention because FDA set limits on use of infected seed in livestock feed,” Evans said. The name comes from swine vomiting after eating infected grain. “More likely, producers will see feed refusal by their hogs.”

The FDA vomitoxin limit for swine ration is one part per million (ppm). For feed yard cattle, the limit is 10 ppm. For dairy cows it is 5 ppm. Evans tells clients to cut the feeding rate in half. “That allows for sampling errors.”

Of serious concern is the toxin zearalenone produced by the same fungus. It impacts breeding females, acting as an estrogen, Evans said.

The toxin develops under the same conditions as vomitoxin.

Not only the seed but also straw can contain these toxins. “Care must be used in selecting bedding straw,” Evans said.

The lab provides farmers more precise readings of mycotoxins in parts per million. The quick test at the elevator shows if there is enough toxin to reject or discount a load of wheat.

This summer Evans receives at least a couple of calls a day about vomitoxin in wheat, he said. Usually he receives none.

The fungus also infects rye, barley and oats. These mycotoxins occur in corn but it’s too early to see them.

Also unknown is the germination level of infected wheat seed, Wiebold said. Seed test labs can check germination. Or farmers can do their own “flowerpot test” to determine percent germination, or “rag-doll tests” can be run by putting seeds in a wet cloth rolled up and kept at temperature of fields at planting.

For farmers, planting the bad seed solves two problems. It makes use of worthless seed. Also, it provides soil cover to prevent erosion.

With limitations on land that earns prevented-planting payments, the winter forage can be grazed by livestock, making winter feed. Check with USDA NRCS and FSA on those limits on cover crop grazing.