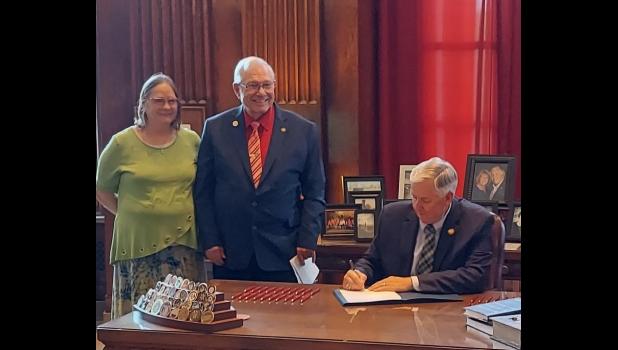 JEFFERSON CITY, Mo. – Governor Michael L. Parson has signed into law legislation designed to crack down on copper thieves, as well as those who steal precious metals and catalytic converters. The legislation, HB 69, was earlier given strong bipartisan approval by the Missouri General Assembly.

Representative Hardy Billington’s bill requires most transactions of scrap metal to be paid for by check or electronic funds transfer, or to include a copy of the seller's photo identification. The change will better allow the state to track copper thieves. A system currently exists to track sales of potentially stolen copper, but cash transactions of less than $50 are untraceable. The change included in HB 69 will ensure all sales can be tracked, which will help to identify and deter thieves.

"When thieves steal copper, they don’t just take property -- they often cause major damage to buildings and equipment. They go through sheet rock and under houses to take the copper in wiring and plumbing. They steal copper coils from air conditioning units. This can quickly cause serious damage, sometimes in the tens of thousands of dollars,” said Billington, R-Poplar Bluff.

The bill also addresses the growing problem of catalytic converter theft by making it a class E Felony to steal a catalytic converter. Additionally, the bill requires buyers of precious metals to wait at least ten days to melt down the item.

Billington said, "I would like to thank my colleagues and industry representatives who worked together for a bill that has the potential to drastically cut down the untold damages caused by thefts of copper, catalytic converters, and precious metals. I especially appreciate the hard work of Jason Bean getting HB 69 through the Senate." He added, “I would also like to thank Governor Parson for signing the bill and for being a good friend to our part of the state.”