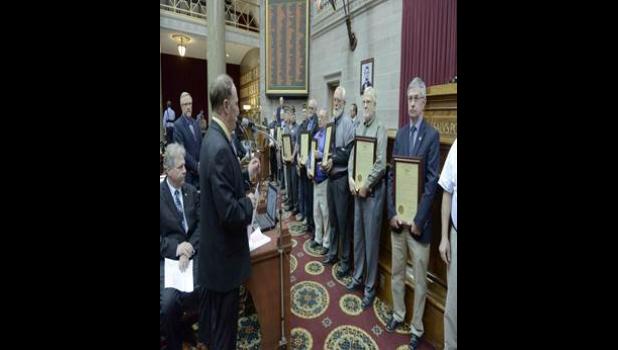 Greetings Friends of the 8th!

Making good on their promise to make substantive ethics reform a top priority, members of the General Assembly sent legislation to the governor’s desk this week that would help improve the culture at the State Capitol. The legislation that has now received final approval from both the House and Senate would prohibit statewide elected officials and members of the General Assembly from receiving compensation as paid political consultants.

The bill, which received bipartisan support in the House and unanimous approval in the Senate, would ensure that elected officials do not receive pay for campaign strategy or fundraising work while in office. As the sponsor of the legislation told his colleagues, some elected officials have used their positions to gain personal wealth, and the bill is meant to prevent this type of conflict of interest.

The bill now awaits the signature of the governor, who has said he supports strengthening the state’s ethics laws.

Missourians with chronic illnesses would have better access to the medications they need under legislation approved by the Missouri House this week. The legislation is designed to prevent redundant “step therapy” so that patients who switch health insurance benefits are not forced to try medications that have already proven to be ineffective before being allowed to use medication that works.

The bill is designed to address a problem the sponsor encountered as he sought medical treatment for his type II diabetes. With step therapy, a patient will first use the most cost-effective and safest medication and, if it is not effective, will then move to a more costly therapy. Step therapy has been an effective process, but the sponsor noted that it becomes an issue when a patient tries several medications to find one that is effective, but then has to start the process all over again when changing insurance providers.

The legislation approved by the House simply ensures that a patient will not have to go through the process of trying multiple medications again simply because of an insurance change. In effect, it makes it so the medicine prescribed by the patient’s doctor is the medicine the patient is allowed to take.

The legislation received overwhelming bipartisan support and is now on its way to the Senate for consideration.

To date nearly 30 states have enacted laws to ban the sale of powdered alcohol. The Missouri House took an important step this week to add Missouri to the list of states where the sale of the powder version of vodka, rum and cocktails would be prohibited.

Supporters of the bill say that powdered alcohol would contribute to underage drinking. They noted that it comes in powder or capsule form, which would appeal to minors and make it very easy to conceal even in places where alcohol is not permitted. Opponents pointed out that the product has been approved for sale in the United States by the Tobacco Tax and Trade Bureau. They said the legislature should not interfere with the free market by limiting the ability of consumers to choose whether to buy the product.

The bill now moves to the Senate for consideration.

The Missouri House approved legislation this week designed to modernize health care in Missouri, and improve the level of care provided by the state’s system of Medicaid. The legislation brings telehealth services in Missouri into state statute and works to bring greater access to health care to Missourians in rural and underserved areas.

The bill would update Missouri’s laws on Medicaid reimbursement in regard to telehealth services so that more health care professionals could provide telehealth care to Medicaid recipients. Supporters of the bill say it is an important change that will allow patients to receive care without having to travel long distances. They noted the change could also result in a significant cost savings. In 2015 the state’s Medicaid program allocated more than $40 million for use in providing non-emergency medical transportation to take patients in underserved areas to see specialists.

The legislation would further expand telehealth services by adding schools as an approved originating site that is eligible for Medicaid reimbursement. Additionally, the bill clarifies the law regarding prescriptions made by a physician via telemedicine to better ensure pharmacies will provide the prescribed medication.

Telehealth is a means of delivering health care through the use of videoconferencing and other telecommunication technologies. It allows patients to have a live, real-time interaction with a specialist, who can provide care almost as effectively as if they are in the same room. Telemedicine has been an option for some Missourians for more than two decades now and the Missouri Telehealth Network has more than 200 sites in 62 Missouri counties. The network provided 30,000 appointments in 2013 that allowed most patients to see specialists that weren’t available in their hometown. A recent study by the network found that 90 percent of patients and providers were satisfied with the quality of care they received via telemedicine.

Some of the state’s greatest heroes made their way to the State Capitol this week to be honored for their service to this country. Vietnam veterans traveled to Jefferson City to be honored by lawmakers during the annual observance of Vietnam Veterans Day.

House members offered resolutions to many of the visiting veterans in appreciation for their service to the United States. Lawmakers also gathered in the House Lounge to offer their sincere thanks to the many veterans in attendance. I had the distinct privilege to honor my brother, Bob Neely, who made the trip to the Capitol for this special ceremony. Finally, members paused from a busy day of debate to honor the visiting Vietnam Veterans on the House floor.

The observance of Vietnam Veterans Day was created by HB 1128, which was approved by the General Assembly and signed into law by the governor in 2012. The day is meant to recognize the courage and patriotism of those who served during the Vietnam Conflict.

As always, please do not hesitate to call or write me anytime with your questions or thoughts on this or any other issue. My Capitol office is 573.751.0246 and my email is jim.neely@house.mo.gov .  Thank you for the honor to serve as your Representative in the Missouri House of Representatives.

Working on your behalf,