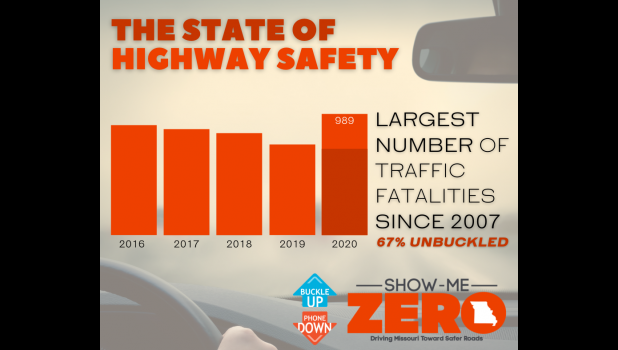 Preliminary reporting for 2020 indicates Missouri traffic fatalities increased by 12% compared to the previous year. According to the Missouri State Highway Patrol, 989 lives were lost in Missouri traffic crashes in 2020 - up from 881 in 2019.

Despite traffic volumes in the state being significantly down for much of the year, Missouri experienced its largest number of traffic fatalities since 2007. In particular, there were notable increases in unbuckled and speed related fatalities, with both experiencing approximately a 25% increase from the previous year.

In 2020, nearly 67% of drivers and passengers killed in car crashes were unbuckled, and preliminary numbers indicate 389 people were killed in crashes involving excessive speed or speeds too fast for conditions. In addition, there were 126 pedestrians killed in 2020 - the largest number of pedestrian fatalities in Missouri ever recorded.

Take a look at the new plan, and do your part to create a safer Missouri. The plan can be viewed in its entirety at SaveMOLives.com.