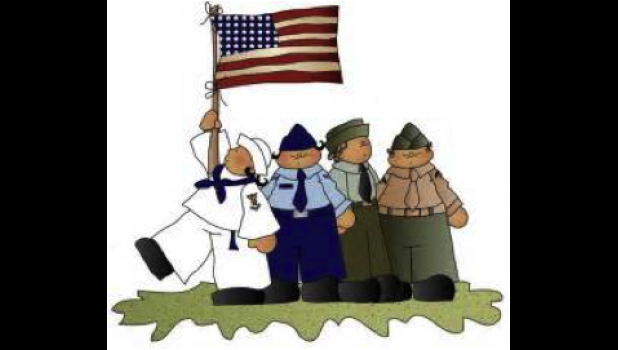 Welcome to the Scuttlebutt. We strive to provide information to local veterans and share a little bit about life in the military.

This week we are again returning to the Korean war, but with a little different twist. I chose to detail the experience of one particular Marine. The Korean War was sandwiched in between WWII and Vietnam, is often referred to as ‘The Forgotten War,’ but for many veterans such as Corporal John Baer of Naples, Florida it is still very much alive in their memories. John Baer spoke in an interview with the Naples Daily News of his experiences during the war and the three Purple Hearts that he was awarded.

The Korean War was fought between those in favor of communism (North Korea aided by the Chinese and the Soviets) and those against communism (South Korea aided by the United Nations with troops from the USA as the principal force. The year was 1952, and John Baer, serving with the 1st Marine Division, was seeking shelter after being hit in the shoulder by a bullet. He couldn’t move his arm, so he sought cover in a bunker, on the aptly named Bunker Hill, as there was an incessant bombardment by the Communist Forces. As he was sheltering, a shell exploded in the doorway and Baer was again wounded in the back and arm by shrapnel. What a way to spend your mother’s birthday he thought as he remembered the date was 11th September. His friend, Ernest “Rosey” Rosengrant was standing in the doorway when the shell exploded and sustained serious wounds. Baer knew he had to save his friend so supporting him with his shoulder, he half carried, and half dragged Rosey along the path through the paddy fields back towards the UN forces main line. Under normal circumstances, this trip took ten to fifteen minutes but with his own and Rosey’s wounds it took Baer over a half hour to get back to the main line. Baer said, “I stopped and rested every once in a while, he kind of helped me along. He had one leg he could move but dragged the other one because it was paralyzed.” Baer kept thinking, “I have to do this. I have to do this. I’ll go. I’m going to do it.” he said. “I just kept going.” Eventually, Baer made it back with Rosey, who was then transferred by helicopter to the hospital.

A couple of months later, he had recovered and was once again defending the 38th parallel, where his unit had been assigned to protect three hills that they had named Reno, Vegas, and Carson. Each day the troops tried to remain awake and alert and as night drew in it was a mad scramble to get to the top of the hill before the Communist forces could lay claim to the high ground. This resulted in some of the bloodiest hand-to-hand combat of the war with both sides fighting with guns, bayonets, and sometimes even bare knuckles. Baer still has a vivid recollection of these battles, “We could hear them coming,” he said. “Blowing bugles and screaming and hollering. I still hear those noises every once in a while.” On his birthday, this time, 22nd November, he was again wounded by shrapnel while conducting a raid near Vegas. His right arm had been ripped up and after stitches and a few days on a hospital ship, he was again back on the 38th parallel; the proud owner of a second Purple Heart.

Finally, just before Christmas, he was wounded for the third time when shrapnel and a bullet pierced his hip while on a raid near Reno. Enough was enough, and Baer decided that this was third time lucky and pushing his luck further was not in his immediate future, so in May 1953 he returned to Ohio, and his wife, Sylvia. This injury earned him his third, and last, Purple Heart.

If you know of a current veteran, or their family, who is having trouble and need help, please contact us at the numbers listed below. At the very least, please, be kind others and PRAY FOR PEACE!

Our Hero this week is Corporal John Baer US Marine

This is how Corporal Baer explained his mixed emotions about fighting in this war.

“I know the people that were there never forgot it,” he said. “We were there for a reason. We did a good job. South Koreans are happy and very prosperous now. And they deserve it.”

On the Light side: “That explains that!”

The Pentagon once did a study on why so many American Servicemen marry women in the countries where they're stationed.

Contrary to popular belief, loneliness had nothing to do with it.

Once the men rotated back to the US, all their in-laws were thousands of miles away.

Under the MISSION Act, VA will expand the PCAFC to eligible Veterans from all eras using a phased approach. Currently, the program is only available to eligible Veterans seriously injured in the line of duty on or after September 11, 2001. Prior to expanding, VA must upgrade its information technology (IT) system and implement other improvements to strengthen the program.

“Caregivers play a critical role in the health and well-being of some of our most vulnerable Veterans,” said VA Secretary Robert Wilkie. “Under the MISSION Act, we are strengthening and expanding our program to positively impact the lives of Veterans and deliver the best customer experience to them and their caregivers.”

In what was hailed as the Pentagon's first-ever report on military family suicides, the Defense Department said Thursday that 123 spouses and 63 children took their own lives in 2017.

According to the inaugural Department of Defense 2018 Annual Suicide Report, the 186 deaths included 122 among of active-duty personnel families, 29 among Reserve families and 35 within National Guard families. The report said the calculated suicide rate for family members, which allows for comparison with other populations, was significantly lower than the rate for the general U.S. population in 2017, 6.8 per 100,000 military family members, compared with 14.5 per 100,000 persons.

A good website is www.va.gov. It has some of the latest news information as well as explaining veteran benefits. Also try www.military.com.