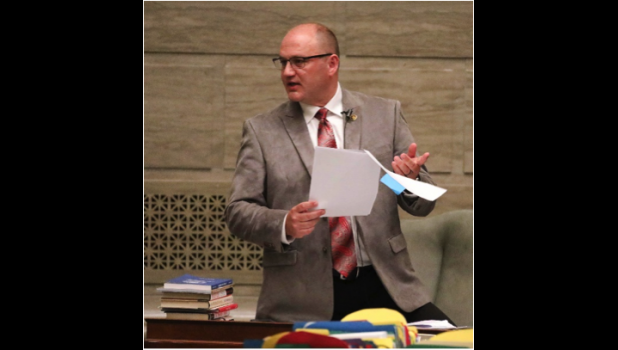 This week, with just days remaining in the 2019 session – and only hours left to pass the state budget – I stood in the Senate chamber and brought legislative proceedings to a standstill. Typically, I’m not prone to rash behavior or sensational acts, but I had reached my limit with the inaction of some of my legislative colleagues in the House of Representatives and believed it was necessary to take a stand.

Before any proposal can become a law, it must be approved by both the House and the Senate. A bill can pass overwhelmingly in one chamber and be defeated on the opposite end of the Capitol. This is a common occurrence in a bicameral legislature and the possibility is accepted by all lawmakers. The assumption, though, is that both bodies will give legislation a fair hearing. I do not believe that is happening in the 2019 General Assembly.

Currently, there are a number of worthwhile Senate bills bogged down on the other end of the State Capitol. One of these measures, Senate Bill 283, extends the sunset on a program that awards educational grants to the survivors of military personnel killed in combat. Senate Bill 145, or “Hailey’s Law,” is also stalled in the House. This measure modernizes the Amber Alert system and has the potential to save the lives of numerous children. Neither of these proposals are controversial. Both passed unanimously in the Senate. These are just two examples of bills that would benefit Missourians that are not moving through the legislative process.

Senator Hoskins read Veterans Day speeches on the floor of the Senate in protest of inaction on Senate bills supporting Missouri veterans.

It would be different if my colleagues refused to pass our bills and proposals because they objected to the legislation. That is not the case. I believe these and other popular bills are being held hostage in the House and will not budge until the Senate takes up legislation to create a statewide prescription drug monitoring program.

Similar PDMP bills have been defeated in the Senate during past legislative sessions. Many of the senators who previously opposed the creation of a statewide database of personal medical histories remain resolute against the proposal today. Some senators believe that PDMPs are ineffective, vulnerable to security breaches and likely unconstitutional. Why should the medical prescription history of law-abiding citizens be stored on a government database?

Despite our reservations, we’re willing to bring the prescription database measure up for debate. As the motto engraved in stone on the walls of the Senate chamber proclaims, “Free and fair discussion will ever be found the firmest friend to truth.”

With this goal in mind, I took control of the floor twice this week to block legislative action. My recitation of speeches by American statesmen was clearly an act of obstruction, intended to send a message to the House. My choice of material – addresses delivered on past Memorial and Veterans Days – also was carefully chosen to make a point. Children of brave U.S. servicemen and women killed in action are the victims of these shenanigans. Likewise, by preventing reforms to Missouri’s Amber Alert system they put children in greater danger at their most dire moment of peril.

Hailey’s Law would integrate the Amber Alert system into the Missouri Uniform Law Enforcement System and Regional Justice Information Services to expedite the reporting of child abductions. Currently, law enforcement officials must follow a cumbersome and time-consuming process before notice of a child abduction can be made public. Seconds count in these situations, and delays can cost lives.

The Veteran’s Survivors Grant Program will end in August 2020 without action from the General Assembly. This program has provided tuition assistance for the survivors of servicemen and woman killed in action since the 9/11 attacks on our nation. Our soldiers, sailors and airmen give their lives for our freedoms. The least we can do is help pay for their children’s education when these brave men and women are no longer here to provide for their families.

I will not stand by while a few members of the General Assembly hold up valuable legislation. I did not enjoy the actions I took this week. I would prefer that the Senate conduct its business deliberately and efficiently. I apologize to my Senate colleagues who may have been frustrated by my filibuster, but principle and good government required me to take a stand. I do not regret my actions, but I grieve the circumstances that make them necessary.

It was my pleasure this week to welcome three recipients of Senior Service Awards, presented by the Missouri lieutenant governor. Marvin Holcer of Chillicothe was recognized for his volunteer work with the Grand River Historical Society and Museum, the Grand River Multi-Purpose Center and For Joy Toys. Lucille Staton received recognition for her efforts on behalf of the Carroll County Senior Center and the Lutheran church. Robert Bryant’s dedicated service to the Carrollton YMCA and First Baptist Church also earned recognition.

I also had the opportunity to welcome several school groups recently, including children from the Hale R-1 School District, and third-grade students from the Southwest Livingston County R-1 District.

As always, I appreciate hearing your comments, opinions and concerns. Please feel free to contact me in Jefferson City at (573) 751-4302. You may also email me
at denny.hoskins@senate.mo.gov.