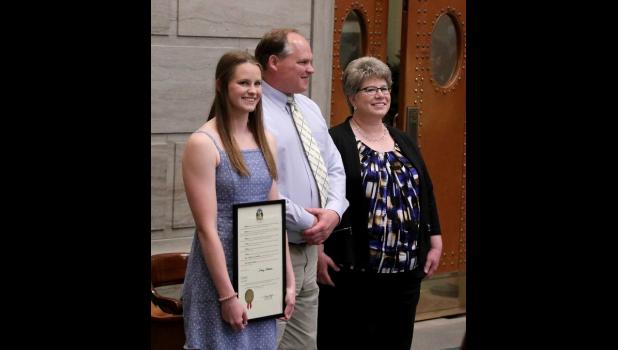 This week one of the most anticipated bills of the 2021 legislative session came up for debate in the Senate chamber. The initial discussion on Senate Bill 39, the Second Amendment Preservation Act, went as might be expected. Proponents of the bill (which I am proudly one of) argued the measure is necessary to protect the rights of Missourians in the face of gun control proposals from the current administration in Washington, D.C. The bill would exempt Missouri from any federal laws that restrict the right to keep and bear arms in violation of the U.S. and Missouri Constitutions. Opponents of the bill held the floor with inquiries and amendments. This went on for several hours before the sponsor laid the bill on the informal calendar. I’m confident we’ll have another opportunity to pass SB 39 (or the House version) before the end of session on May 14. It won’t be easy, and I’m bracing for a hard-fought effort to overcome opposition if we’re going to get this through to the finish.

Also this week, the Senate debated my Senate Bill 98. A comprehensive package of legislation relating to gaming in Missouri, the bill is the result of five years of work and compromise. I have met with any and every party willing to come to the table to negotiate a regulatory framework for gaming in our state. Fellow legislators, regulators, concerned citizens and businesses of all sizes have consistently been willing to work with me in this endeavor.

I believe the measure I presented to the Senate this week would finally address the proliferation of illegal gaming machines across Missouri, while providing increased opportunities for the state’s residents to participate in games and place wagers in a legal, regulated gaming environment. The legislation would authorize a system of video lottery terminals, and bring sports bets out of the shadows. Together, these activities could provide more than $200 million in new revenue for education and veteran’s programs in our state.

I am disappointed the discussions surrounding SB 98 eventually reached an impasse on the Senate floor. However, I am not discouraged. I believe Missourians desire safe, legal and fair gaming opportunities and I am convinced our schools and veteran’s facilities could benefit greatly from these activities. I will continue to work with anyone willing to engage in honest, productive discussions about ending illegal gambling in our state and replacing it with regulated games that benefit all Missourians.

In other legislative action, my Senate Bill 152 received a “do pass” recommendation from the House Elementary and Secondary Education Committee. This bill brings Missouri’s 529 education savings program in line with federal 529 plans and also expands gifted education programs in local schools. I’m hopeful the full House will approve this bill, and we can get it sent to the governor’s desk.

Finally, the Senate approved its version of the state budget this week. Next week, the differences between the House and Senate appropriations bills will be sorted out by a conference committee, with members from both chambers. A final version of the Fiscal Year 2022 operating budget will need to be approved by the full General Assembly prior to 6 p.m. Friday, May 7. All eyes were on the Senate chamber Wednesday night to see whether we would appropriate money for Medicaid expansion. We did not. I joined with 19 other members of the Senate to vote to defeat Medicaid expansion. My vote to oppose the increase is consistent with the will of the voters of my district, as well as my promise to oppose Medicaid expansion that I made to voters in 2016 and 2020.

This week, I was proud to present a Senate resolution to Allison Weber of Marshall. Allison recently placed first in the 1,000-yard freestyle event at the NCAA Division II swimming championship in Alabama. A 2018 graduate of Marshall High School, Allison was a four-time All-State swimmer. She competed at the national championship as a member of the Panther Swim Team of Drury University in Springfield. Congratulations to Allison.