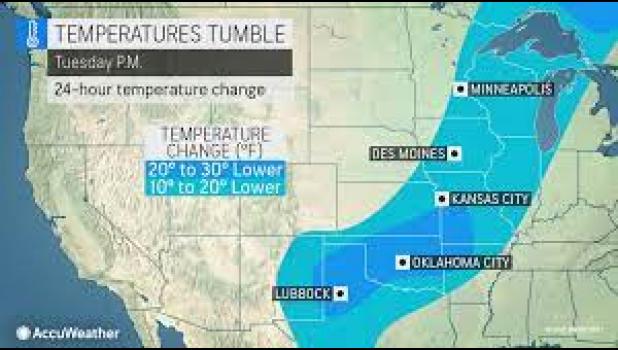 A powerful storm that slammed into the West Coast to start the weekend will continue to be watched as it marches from coast to coast throughout the upcoming week. On top of the threat for flooding rainfall and severe thunderstorms, a blast of cooler air will sweep across the nation to welcome in the autumnal equinox, which occurs on Wednesday, Sept. 22.

The storm definitely made its presence felt as it marched into the West Coast on Saturday. An unusual early-season rain extended from Seattle southward into northern California, providing a major boost to firefighting efforts across the region. While cool and wet conditions will continued across the Northwest to end the weekend, AccuWeather forecasters say the storm isn't quite done yet.

The late-summer heat in place across the Plains, Midwest and Northeast will quickly be erased early this week as the storm marches into the Plains and Midwest. The warm air on Sunday allowed for locations such as Bismarck to record high temperatures of 86 degrees Fahrenheit, falling several degrees short of the record of 94 degrees set in 1972. Residents will notice a dramatic 24-hour shift on Monday with a high temperature forecast to dip to a seasonably cool 69 degrees, as the normal high on Sept. 20 is 72 degrees. Overnight temperatures are also forecast to drop dramatically in contrast to the previous 24-hour low temperature, reaching the lower 40s.

A case of weather whiplash will march eastward with this storm throughout the week, as temperatures tumble downwards of 10, 20, even 30 degrees in a matter of 24 hours time. Areas first in line for this dramatic shift will be the Plains on Monday.