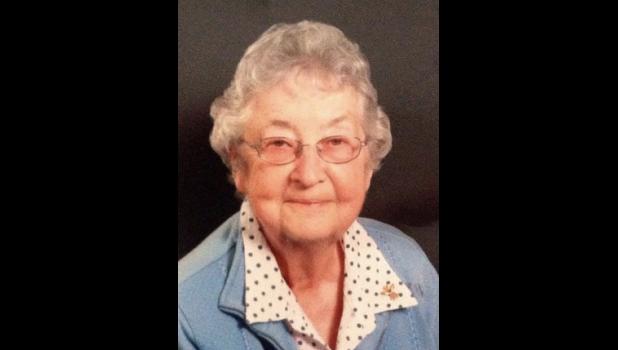 Adena Jeanne (Kinne) Clayton, age 89, of Braymer, MO, passed away peacefully Aug. 29, 2020, at her son’s home in Gladstone under the care of Kansas City Hospice and Palliative Care.

Mom (aka Ma, GMa and Grandma Bubbles) was proud to be a life-long resident of Caldwell County. She was born May 31, 1931, a few miles southeast of Hamilton, to Owen Dean and Ada Pearl (Lay) Kinne, and along with her older brother Robert L. “Bob”, she was raised on the family farm. Mom attended Excelsior and New York elementary schools and was the valedictorian of the 1949 graduating class of New York High School. After earning her teaching credentials at Warrensburg, she taught elementary school at Breckenridge for a couple of years, and then worked for a time in the payroll department at Hallmark Cards in Kansas City.

On April 2, 1954, Mom and Dad, Lewis Donald Clayton, were married at Hamilton Methodist Church. They spent their married life and raised their family on the Clayton farm in the Gould Farm/Hopewell community. Mom was a member of Hopewell Baptist Church and was active in various community clubs. A few years after Dad’s death (January 5, 1984), she began working for the U.S. Customs office in Kansas City, retiring from there in 2001. By this time, she had moved into Braymer, where she attended Braymer Baptist Church and was active with the Baptist Women, Pleasant Hill Lyons Club, Tuesday Study Club, Pinochle Club and Red Hat Club. Though she had moved off the farm, Mom enjoyed keeping her hand in farming and at the time of her death, still owned a small herd of cattle.

Mom was preceded in death by her father and mother, Dad and Uncle Bob and Aunt Jean.

Mom was a kind and gentle soul who loved her family and friends unconditionally. She was incredibly proud of her children and grandchildren and their accomplishments. Watching her grandchildren grow into adulthood and pursue higher education, careers, families, etc., was a source of great joy, and her great-grandchildren were a continual source of enjoyment and amusement. No matter the time of year, Mom loved hosting Easter egg hunts for the kids. She also enjoyed blowing soap bubbles with her great-grandchildren, earning the nickname Grandma Bubbles.

A celebration of Mom’s life is planned for a later date and will be announced soon. Because she loved to read and instilled that passion in her family, in lieu of flowers, donations may be made in her memory to the Caldwell County Library, 275 S. Washington, Kingston, MO 64650.