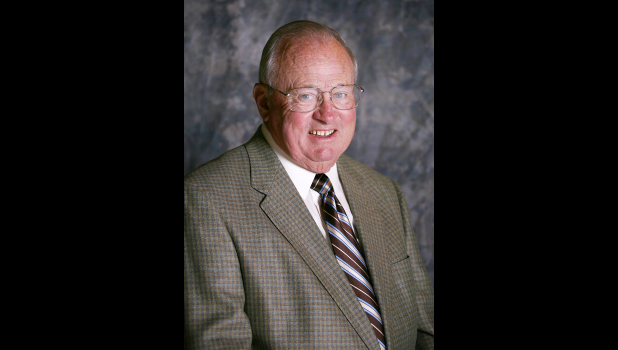 Dean was born on Dec. 24, 1930, in Perrin, MO, to Leo Matthew and Bernadine Louise (O’Connor) Hales. He was a 1948 graduate of the Hamilton High School, and served his country in the Army during the Korean Conflict from 1952-1954. Dean was a businessman and owned many grocery and convenience stores throughout Northwest Missouri, including Hamilton, Cameron and Gallatin.

Dean was an enthusiastic promoter and supporter of Hamilton. He was a member of the Hamilton Lions Club, Chamber of Commerce, Booster Club, Hamilton Community Improvement and Development, Alumni Association and Green Hills Regional Planning Commission. He was instrumental in the establishment of the J.C. Penney Memorial Library and Museum, serving as a trustee, as well as the placement of the J.C. Penney boyhood home in downtown Hamilton. Dean was also a devoted member of the Sacred Heart Catholic Church in Hamilton.

Dean and his wife, Dixie, traveled all over the United States, many times with their children, as well as abroad. Dean and Dixie were avid NASCAR fans and attended the Daytona 500 race almost every year, beginning with his first race on the beach there in 1956. He was a pit crew member of USAC and IMCA champion Ernie Derr.

He was preceded in death by his parents; grandson, Jeremy Todd Burdick; and great-grandson, Zachary John O’Brien.

Dean married Dixie Lou Connor in Hamilton at the Sacred Heart Church on May 8, 1950. She survives of the home.

Arrangements are under the direction of Bram Funeral Home in Hamilton. www.bramfuneralservices.com