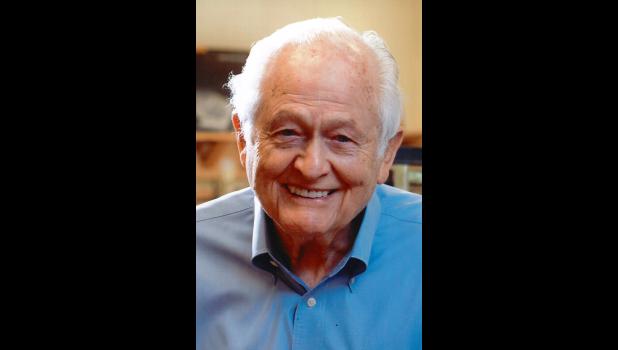 “Maxine will now entertain us, tap dancing to ‘Mr. Bojangles’”. That was Paul Kendall Kincaid, the son of Leslie B. and Carrie B. Fowler Kincaid born Jan. 30, 1921, in Polo, Missouri and died Sunday, Jan. 17, 2021. He was broadcasting from his homemade transmitter and bedroom studio in Braymer. Paul was on the air most Saturday mornings in 1937 and 38 with the exception of game days when he played basketball for his school team, the Braymer Bobcats.

Following high school, Paul attended William Jewell College for three years. There he was inducted into Gamma Sigma Epsilon Honorary Fraternity for outstanding chemistry majors. Three years later he graduated with distinction from the University of Missouri-Kansas City School of Dentistry and was inducted in Omicron Kappa Upsilon Honorary dental fraternity. Dr. Kincaid started his practice in 1945. He entered the US Army and served as a dentist at New Cumberland Disciplinary and Quartermaster Depot in Cumberland, PA, and was honorably discharged as a Captain in late 1954.

He returned to Lawrence and practiced at 23rd and Barker until his retirement following his 94th birthday in 2015. He and his son Dr. Charles Kincaid traveled to Haiti on medical missionary trips in 1983, 1985, and 1987. He was honored as a Paul Harris fellow by Rotary in recognition for his work in Haiti. He received his Ham Radio License in 1941. He especially appreciated the recognition by his peers in the Douglas County Dental Society for his 70 years of practice in Lawrence.

Paul enjoyed working in his shop making clocks and bracelets for his many friends. He also loved “sneaking out” of Presbyterian Manor for breakfast with his son Paul Kincaid Jr., who was his and mom’s loyal caregiver for many years. Most of all he believed in God and took the Golden Rule literally as he measured, measured, and measured some more before proceeding as the motto he lived by was ‘Do It Right.”

Online condolences may be sent at rumsey-yost.com. Arrangements were under the care of Rumsey-Yost Funeral Home in Lawrence, KS.