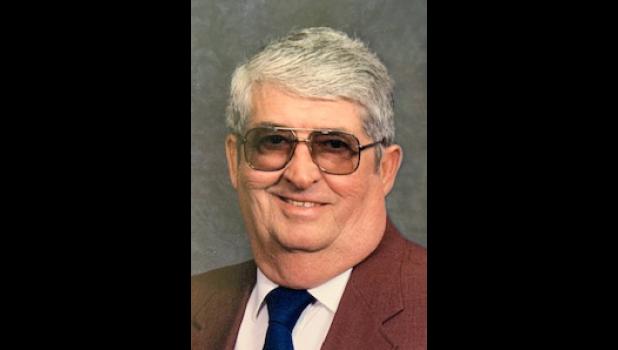 Jimmy Leon (Jim) Henry, 83 years of age, of Holdrege, NE, passed away on Monday, June 15, 2020, at Holdrege Memorial Homes. Jim was born on Sept. 15, 1936, in Hamilton, MO. He was the eldest of two children, of LaVern and Lena Mae Henry. Jim received his education from Hamilton Public Schools and graduated from Penney High School in Hamilton with the class of 1954.

On August 8, 1970, Jim was united in marriage to Betty Hocquell Ellis. The couple made their home in Holdrege, NE. Jim spent his life in Nebraska working first as a farmer with his friend and mentor, Ward Bryan, at the Busy B Ranch in Holdrege. Following his retirement at the farm, Jim became the manager of Bosselman Oil in Holdrege.

Jim enjoyed many simple things—a Sunday drive to look at crops and farm implements, reading the paper, watching a ball game on television, and napping in his recliner, doing all of these things wearing his signature pin-striped bib overalls. Jim was an avid collector of knives and loved tinkering at his workbench, making his own knives and homemade scrapers to share with friends. He could put an edge on a knife like no other. Much of the time Jim was a silent observer but liked to “stir the pot” and had a hardy, contagious laugh.

One of his favorite things was having coffee with his friends. Without fail, at 4:00 p.m. on any weekday, you could find him and his pals having coffee at the Cozy, the Zephyr, or Country Cookin’. He valued those friendships until the end.

Besides his parents, he was preceded in death by his daughter, Cynthia Westhoff and his brother, Larry Henry.

Jim leaves to celebrate his life: his wife, Betty Henry of Kearney, NE; his daughter, Genella Fernow (Rod) of Fingal, ND; his daughter, Kelly Drennan of Jefferson City; his son, Lake Ellis (Libby) of Brandon, MS; and his daughter, Kim Spencer of Leander, TX. His brother, Larry’s children were also an important part of his life—Brian Henry, Stephanie Cook, and Brent Henry (Susan), all of Missouri. He is also survived by his grandchildren to whom he taught many life lessons: Chris, Brock, Patrick, Ricky, Jimmy, Brooke, Tanner, Hunter, Aaron, Skyler, and Brady. Jim also had many great-grandchildren, nieces, nephews, and extended family.

There will be no viewing or visitation. Memorial services for Jimmy L. (Jim) Henry will be announced at a later date due to current health restrictions in place with the COVID-19 pandemic. A memorial has been established in Jim’s honor and will be designated for Holdrege Memorial Homes. Memorial donations can be sent to Nelson-Bauer Funeral Home, 401 Burlington, St., Holdrege, NE 68949. Expressions of caring and kindness can be sent to the family at www.nelsonbauerfh.com. The Nelson-Bauer Funeral Home in Holdrege is in charge of the arrangements.