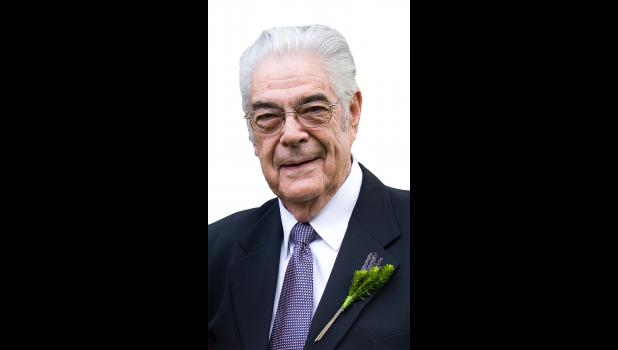 His journey of life began Nov. 19, 1931, in his grandparent’s home located south and west of Hamilton. John grew up on the family farm. He attended Graceland College and CMSC at Warrensburg, completing a bachelors and masters degree in education. He was a lifelong active member of the Sigma-Tau-Gamma fraternity.

John taught social studies and coached athletics at the junior and senior high school levels for nine years. He then entered the insurance field and obtained his CLU designation. He became a top producing agent and then served as manager of agencies in St. Louis and Cincinnati, OH. He also became the superintendent of Midwestern agencies for the Union Central Life Insurance Company before returning to Kansas City in 1980 to again become an agent and brokerHe retired in December of 2019.

John married his childhood sweetheart, Eloise Bowen, on July 8, 1951, at the Hamilton United Methodist Church. They were married 68 years and together had five children, 18 grandchildren, 29 great-grandchildren and still counting.

John and Eloise attended Mission Road Congregation of the Community of Christ Church where, over the years, John served as Elder, Pastor, High Priest, and Evangelist. John loved his family, serving others in his career, church, the farm, Skipper, as well as too many friends to count. John loved to play bridge and travel with friends. He loved attending and participating in book club with Eloise, whether he read the book or not. Most of all he loved playing at the farm with his family. He was beloved by many in all of the communities where he served.

Preceding him in death were his grandparents; parents; and oldest daughter, Joan Louise Strom Millard.

For everyone’s health and safety at his time, we will be holding a celebration of John’s life at a later date. If you would like to share messages or memories with the family or make a charitable donation in lieu of flowers in John’s honor, please visit Bram’s funeral home website at bramfuneralservices.com. The memorials are listed on the Bram Funeral Home website. Friends may call at Bram Funeral Home in Hamilton, on Friday, March 20, from 10:30 a.m. until 5 p.m. Bramfuneralservices.com