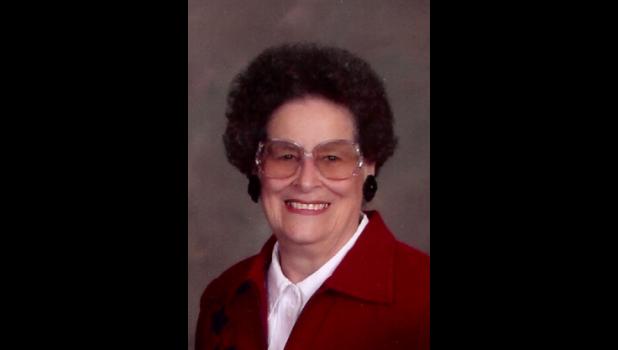 Lucretia was born Nov. 19, 1932, in Stillwater, OK, to Owen Hartman and Maudee Dessie (Callicoat) Schneider. Due to her father’s career assignments across the U.S., she attended over 20 grade schools and nine high schools, graduating from Ruskin High School in Hickman Mills in 1951.

She graduated from Central Missouri State University in 1955, with both a Bachelor of Science in Economics and Bachelor of Science Business Administration in Accounting and was CMSU’s first female economics graduate. On campus she was involved in Varsity Debate, Business Club, Dolphins Synchronized Swim Club, Square Dance Club, and Phi Delta Kappa.

Lucretia met her husband, Robert Hawley, at CMSU and they were married on Nov. 27, 1955. They had four children and two grandchildren, and had celebrated 60 years of marriage before his death in Dec. 2015.

After spending two years in Tacoma, WA (while Robert served in the military), they settled in Hamilton. During the 1960s, Lucretia taught business classes at Penney High School and Breckenridge High School. In 1970, she received her Master of Arts in Accounting from CMSU, and held certificates as a Certified Public Accountant and Certified Management Accountant. She was a college level instructor for 25 years and taught Business, Economics, and Accounting at Missouri Western State University until retiring in 1995.

Lucretia was a loving wife, mother and devoted grandmother, and enjoyed cooking, traveling, reading, flower arranging, home canning, quilting and was a crossword puzzle enthusiast. She was a dedicated member of the Hamilton Community of Christ Church serving as treasurer and as co-pastor with Robert, a Skylark and Orioles girl’s leader, and a summer church camp lifeguard and teacher. She was a board member for Camp FarWesta and Peace Unlimited, a member of the Community of Christ World Church Hunger Committee, and an active supporter of Outreach International.

For everyone’s health and safety at this time, we will hold a celebration of life at a later date. If you would like to share messages or memories with the family, please go to: www.bramfuneralservices.com. In lieu of flowers, please make a memorial contribution to Outreach International, 112 W. 18th Street, Kansas City, MO 64108. Cremation has been entrusted to Bram Funeral Home in Hamilton.