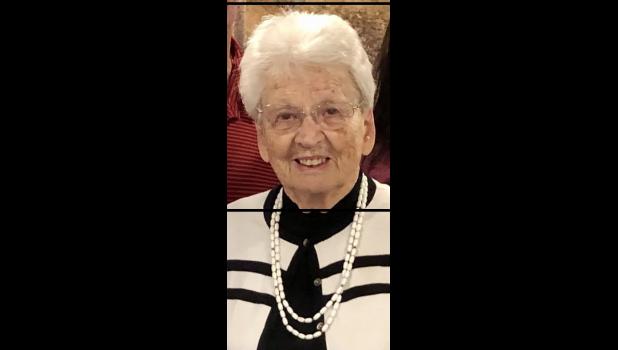 Mary Kelly passed away at the Saratoga Care Center in Saratoga, WY, on Jan. 29, 2021.
Mary was born on a farm near Braymer, MO, to Lee McBee and Nellie McKnight McBee on April 11, 1927. She was a graduate of Braymer High School along with classmate, Harold Kelly. Upon her high school graduation, Mary worked for the local Braymer bank. She married Harold Kelly on Jan. 29, 1948, in Chillicothe. Together they had two daughters, Lynda and Janice.
The family moved to Rawlins, WY, in the early 50s. Harold hired out with the Union Pacific Railroad and Mary continued her banking career with The Rawlins National Bank, retiring in 1978. After Harold’s retirement from the UPRR in the 1990s, they left Rawlins to continue their later years at Adriel Hills in Ft. Collins, CO. During these years, they continued their love of dancing, especially with Bill and Lavonna’s Dixieland Band, and also traveling with the UPRR Old Timers and the RNB Heritage Club with their daughter Lynda as their guide.
Mary is survived by her daughter, Lynda (Kenny); grandson, Kelly (Ashley); great- grandsons, Riley and Devon Kramer-Klouda; brother, Donald Dean McBee; sister-in-law, Lois Kelly; and many nieces and nephews.
She was preceded in death by her husband, Harold, and her daughter, Janice.
There is no service planned. Burial for Mary and her daughter, Janice, is planned for late summer in Missouri.