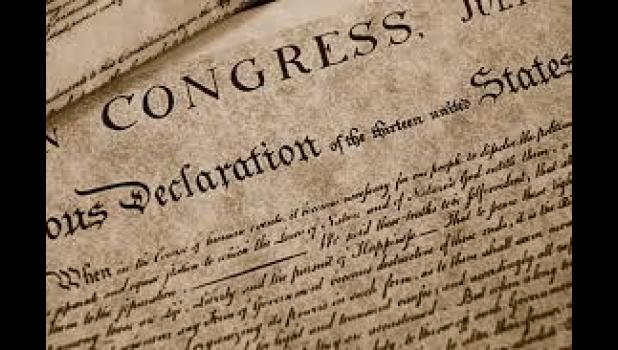 The battle for America’s Soul

“We hold these truths to be self-evident, that all men are created equal, that they are endowed by their Creator with certain unalienable Rights, that among these are Life, Liberty and the pursuit of Happiness. — That to secure these rights, Governments are instituted among Men, deriving their just powers from the consent of the governed;”

This fifty-five word statement that begins the Declaration of Independence is the DNA of the United States of America, and it is under attack.

The attack is from those who deny the basic tenet that rights come from God, and insist that they are allowed or tolerated by government. If one doesn’t believe in God, they are not going to believe in natural rights as the two are inextricably intertwined.

If rights come from government, then they are not rights at all, but instead privileges bestowed and taken away by whoever happens to have their hands on the controls.

And when that kind of power is at stake, some will do anything to gain it.

Every American needs to understand what Antifa is.  The original Antifa movement was made up of communists in Germany who opposed Hitler’s Brownshirts, and that is what the modern violent left wing movement claims to be doing today.

But today’s reality is they are seeking to take down capitalism with an anything goes approach which includes violence. They have labeled anyone supporting President Donald Trump as a fascist without actually knowing or caring about the meaning of the word. They label those who stand up for individual liberty and freedom as racists because they reject the concept of equal opportunity as being a notion of white privilege and instead demand equal outcomes.

American Antifa is a local cell based entity which pops up to create chaos whenever a speaker they don’t like threatens to challenge their hegemony over thought on the formerly free-thinking institutions of “higher” learning.

They are dedicated to intimidating opposing views into silence, wearing masks to hide their identities so they can slip easily back into their comfortable lives, not unlike their white hood wearing brethren from a by-gone era.

We’ve seen them at Trump campaign rallies, college campuses, at various ICE offices. What we haven’t seen is an outpouring of outrage by the left at this commitment to violence against those who they cannot win a political argument.

When the Antifa supporting college professor of ethics injures three Trump supporters smashing their heads with a bike lock, he can justify the assault based upon the evil he ascribes to those who don’t agree with him.  And the greater good accomplished by shutting up someone who doesn’t agree with the message of tolerance for everyone but white men and Christians by the black wearing thugs.

Antifa rejects not only the precepts that individual rights are endowed by our creator, but the agreement that government should be by the consent of the governed. Instead, they seek the power of the guillotine to use against those who they cannot defeat in elections.

But that is the real question, the unmasked Antifa is the Democrat Socialist left which is every bit as intolerant of ideas like free speech and free markets, and can be counted upon to be every bit as tolerant of their political opponents should they gain power as their masked alter egos are when they are out of power.

Elections matter.  This one in November is about whether the violent left will be legitimized by the electorate.  For those who care about freedom and individual rights, there can be no sitting this election out, even with the imperfect choices offered.  The only thing more dangerous to freedom than an Antifa thug with a bike lock is a Democrat Socialist with a Congressional voting card.

Deny them victory at the ballot box and they will wither, but cede the field and allow them to win in November due to your inaction and the seed of hate they represent will germinate like crab grass in a once pristine lawn.

The battle for the DNA of America is being fought.  This is no time to sit on the sidelines.

The author is president of Americans for Limited Government.