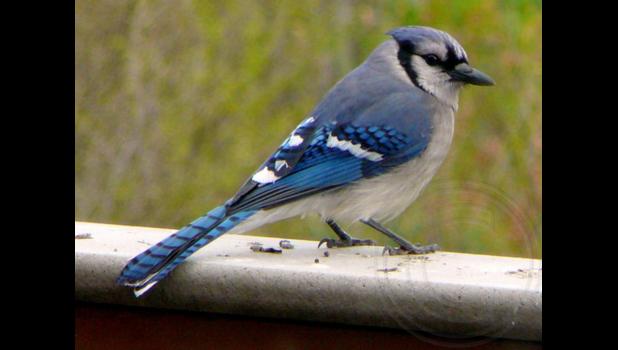 Blue jays are pretty hard to miss. I'm speaking figuratively of course. They are big, loud and brightly colored. They are a flashy, intelligent bird that lives in our part of the country year round. This common, large songbird is familiar to many people, with its perky crest; blue, white, and black plumage; and noisy calls. Blue Jays are known for their intelligence and complex social systems with tight family bonds. Their fondness for acorns is credited with helping spread oak trees after the last glacial period.

Blue jays are social and smart enough that a lot of what they do is not completely understood. For example, according to Cornell Universities Ornithology Department;

“The Blue Jay frequently mimics the calls of hawks, especially the Red-shouldered Hawk. These calls may provide information to other jays that a hawk is around, or may be used to deceive other species into believing a hawk is present.”

Red Shouldered hawks aren't that common in north Missouri, but Red Tailed Hawks are. I don't know that I have ever heard Blue Jays mimicking hawks  before, but I plan to listen and watch for them doing this while I am in the woods this fall.  (The Red Tailed hawks cry is probably familiar to most of us. It's the sound every Hollywood movie uses when they show an eagle soaring on screen. )

That all sounds a little confusing. Just remember, some Blue Jays make Hawk sounds and we are not sure why. Hollywood uses hawk sounds when it puts an eagle on the screen because and eagles actual call is kind of prissy by comparison to the red tailed hawk.

In addition to being smart , blue jays are long lived too.  The oldest known wild, banded Blue Jay was almost 27 years old when it was found dead after being caught in fishing gear. It had been banded in the Newfoundland/Labrador/St. Pierre et Miquelon area in 1989 and was found there in 2016.