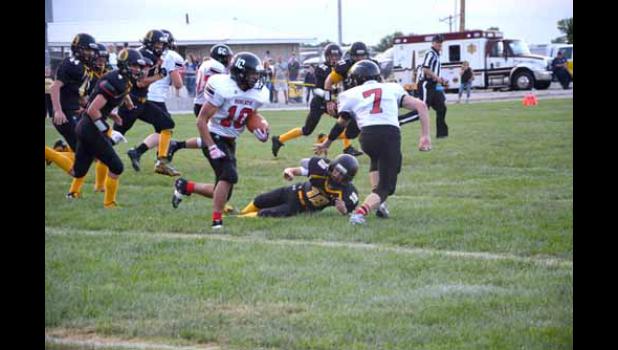 With just a few days left until the season practices started, the Bobcats were without a coach. Thankfully, Coach Railsback answered the call and took the head coach role. If Friday night is an indication of how the season is going to go, we're sure glad he did. Assisting him this year are Coach Clariday and Coach Edmonston. This team of coaches has put together a solid defensive and offensive team.

The Bobcats headed to Bearcat country to take on Orrick on their home field. Orrick was caught off-guard with no way to answer the variety of offense the Bobcats brought. Just when they thought they had the running game shut down, the arm of quarterback, Wade Phillips came alive. Phillips made 5 out of 7 passes for a total of 180 yards. Jacob Dudley's hands were on fire catching 105 of those yards. Austin Hall followed with 75 receiving yards with that catch resulting in a touchdown. The running game was lead by Ryan Atherton's bullet speed with 125 rushing yards and he was followed by returning starter Logan O'Dell pushing through the crowd of defenders to gain 81 yards.

It would be amiss to not mention the Bobcat defensive game. The Bobcats held the Bearcats to 2 touchdowns, with both of these being in the first half.  The Bobcats controlled the ball for all but about 3 minutes of the third quarter. Bearcats were on the march to score one more time in the 4th quarter, but on the fourth down, Robbie Shoe recovered a fumble and stopped the progression. Leading the defense was L. O'Dell with 9 tackles. with 1 sack. Drake Parker followed closely with 8 and R. Atherton and Jason Gates had 6 respectively. Unfortunately, one of our players was hurt. Keaton O'Dell ended up with a broken wrist, but only after he made a spectacular tackle on  the kick-off. Best wishes for fast healing Keaton.

Nice job Bobcats with a 47-12 victory over the Bearcats. Looks like a very promising season. Come out Friday night to watch some good football. Braymer Bobcats have their home opener against Slater.