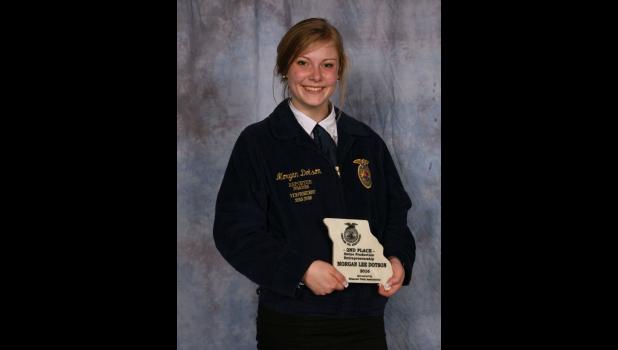 Dotson, a senior at Penney High School, is the daughter of James and Glynis Dotson. She is a member of the Hamilton FFA chapter. Her FFA advisor is Brant Burns.

Dotson’s supervised agricultural experience program began her freshman year when she purchased a Hampshire gilt. After her success with the first litter, Dotson increased her herd to 18 breeding animals. Dotson has expanded her operation to sell show pigs and market animals. She also utilizing a cross-breeding program using old style Hampshire boars on her gilts.

In addition to FFA, Dotson is involved with volleyball and 4-H. Dotson was also voted super trooper student counselor.

Dotson plans to attend Fort Scott University in Kansas and compete in livestock judging. Dotson then plans to transfer to the University of Missouri-Columbia before going on to become a veterinarian.

The FFA makes a positive difference in the lives of students by developing their potential for premier leadership, personal growth and career success through agricultural education.