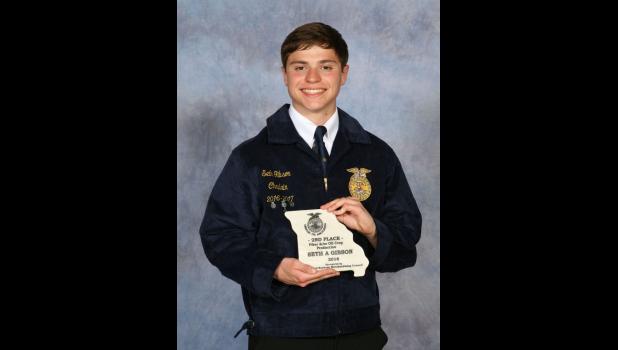 Gibson, a junior at Norborne High School, is the son of Todd and Sharon Gibson. He is a member of the Norborne FFA Chapter. His advisor is Kelly Lee.

Gibson’s supervised agriculture experience program consists of 160 acres of soybeans. In the past year he has increased his acreage by 80 acres by renting land from his sister. This addition has allowed Gibson to complete more research on soybean varieties based on the soil types in his fields. He has also studied the weed pressure to determine if any changes should be made to his herbicide applications. In the future, he would like to diversify his operation by adding sweet corn.

In addition to FFA, Gibson plays football and basketball. He is also a member of National Honor Society and student council.

After graduation, Gibson plans to attend the University of Missouri-Columbia and study broadcast journalism.

Proficiency awards recognize FFA members who excel as agricultural entrepreneurs, employees or volunteers while gaining hands-on career experience. Fiber and/or Oil Crop Production is one of 48 proficiency award areas recognized at the state level and was sponsored by the Missouri Soybean Merchandising Council.