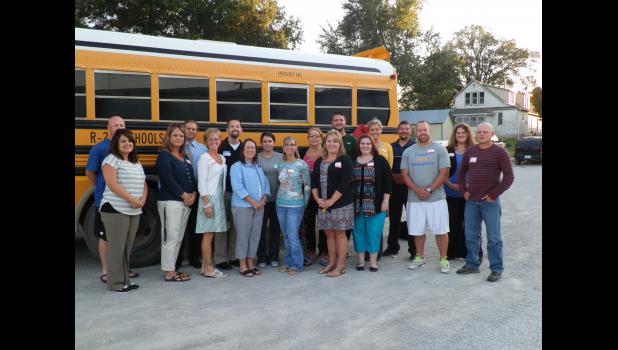 “School has started” was the theme of the Hamilton School Board meeting on Wednesday. The Superintendent’s office was full of new teachers who were introduced to the board. Superintendent Ford made a comment that he was pleased with the new staff and they seemed to be excited to be here.

The Hamilton United Methodist Church served a meal to the school staff on Tuesday and also donated $100 for school supplies.

The board discussed setting the tax levy. This year assessed valuation increased 1.6 million, which was the result of commercial, utility and industrial valuations. Ford said that Railroad and Utilities has increased, personal property went up and agriculture went up. He explained that when the assessed valuation goes up, the State Auditor can lower everyone’s taxes, because if they let things the same, the district would be making even more money. A motion was passed by the board to set the new tax levy at $4.48. This is based on a 90% collection rate.

The board passed a motion to approve the Local Compliance Plan Certification. This is basically a plan which states schools are in compliance with state and federal guidelines on special education. Hamilton uses the state model plan with a few slight changes that are dealing with qualifying a child for a specific learning disability.

The Booster Club bought a trailer and donated it to the district. Ford said any school group is welcome to use it. It was put on the schools insurance, but the person pulling the trailer would be responsible for liability insurance on it. If it is vandalized, the school’s insurance should cover the contents.

Ford said another air conditioner in the elementary school went out. It was seven years old and had the same issue the other had with the compressor. The cost to have it fixed was $1,800.

They did bury the drainage tubes and tore out some sidewalk so the water would run underneath the ditch. They were also looking at making all the pop machines in the district a full service from Coke.

They passed their pre-school inspection with Fire and Sanitation after a light fixture was repaired.

The new boiler will be completed by the end of the week. Schieber said his teachers were more excited to come back with the addition of new air conditioning.

Ford said another update was Brandon Kanoy’s project at the softball field, which turned out real nice. They had some money left over and were looking at purchasing another set of bleachers. Bleachers in the gym is the only other project to be completed. They will be installed with handicap accessibility.