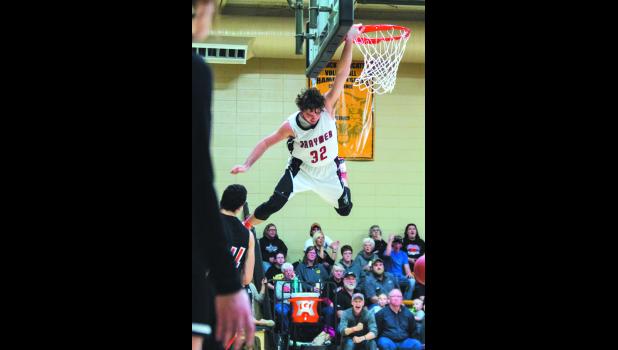 The second round of district play found the Braymer Bobcats facing the team that captured the title from them last year. These foes had met earlier in the year and the Bobcats had come out with the victory in that game. The Bobcats hoped to do the same thing on this Thursday night and that they did in a big way winning the game by 20 points to move on to the District Championship game.

Miller put in a 3 to start the scoring for the night. Layman answered with a 3 for Hardin. Hall put in a couple of buckets and Rogers swished 2 free-throws. The Bobcats allowed the Bulldogs to only score 4 more points. Coach Layman decided to chat with his boys. Hall put in another bucket and Atherton swished a three. Hardin scored a bucket and then Layman put in another 3 for his ninth point of the game. Coach Mallory switched up the defense a little bit. Atherton landed a 3 at the buzzer and the crowd went wild with the Bobcats leading 21 to 12 at the end of 1.

Hall started the scoring in the second quarter with a pass from Atherton. Rogers put in both of his free-throws. Layman put in one free-throw. Miller scored, then Shoe scored off an offensive rebound. Hardin scored. Hall hit 2 more buckets and Shoe put in a free-throw. Layman scored his 3rd and final point of the quarter. Hardin got another point off a free-throw. Hall and Atherton scored and at half the Bobcats had a 20 point lead 38 to 18.

Coach Mallory really had the right strategy to conquer these Bulldogs it seemed. Braymer came out on a mission in the third and that was to take this game and move forward to the next. Layman scored first, but then Shoe passed to Hall for 2 points. Miller went in for the dunk and Braymer's crowd was on their feet. Hall put in 2 off an offensive rebound and Coach Layman decided to discuss things with his boys again. Braymer was now up by 24. Rogers added to the scoring with 2 free-throws. Hall got 1 free-throw and Miller laid in 2. Hardin scored with 1 free-throw and Layman got only his second bucket for the quarter. Braymer's defense was on fire. Braymer ended the 3rd quarter up 49 to 23.

Miller threw into Hall for 2 to start the scoring in the 4th. Hall then stole the ball and traveled all the way to the other end for the score. Sorry Bobcats fans it wasn't a dunk, even though all of us were holding our breath for one. Miller scored the next bucket, then the double trouble boys and the other starters got to take the rest of the night off. Woods put in 2 for the Bobcats. Layman scored 8 points. Hardin hit a buzzer half court 3 to end the game. Braymer conquered the game 57 to 37.