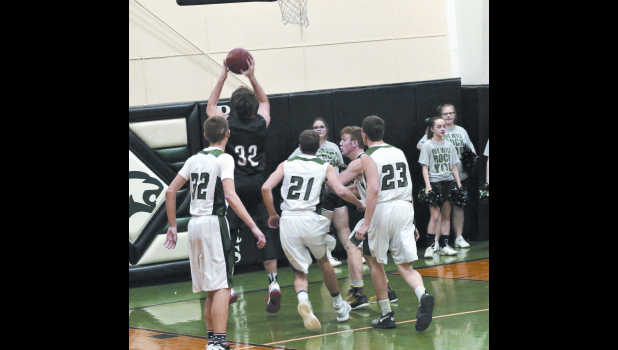 Braymer had to only travel about 15 miles to their last regular season game at Polo.

Braymer put the first bucket in with a pass from Shoe to Hall. Polo answered with a 3 to pull ahead. Hall scored 2 baskets to put the Cats back up by 3. The Panthers and Cats traded baskets with Miller, Shoe, Hall and Atherton scoring for the Bobcats. Polo put in a 3 for the last scoring of the quarter to tie the game up 14 to 14 at the end of 1.

The second quarter was a low scoring, defensive quarter. Polo swished a 3 to pull ahead for the 2nd time in the game. Hall, Miller and Rogers scored to put the Cats back in the lead. The Panthers weren't giving up though and swished another 3 to take the lead for the 3rd and last time in the game. Hall and Atherton scored, then O'Dell put in a bucket to put the Cats back in charge 23 to 21 to go into the locker room at half.

It was evident Braymer needed to do some work on crashing the boards on both ends of the court and so it began. Rogers put in a bucket to start the scoring in the 3rd. Atherton followed with a bucket. Polo received a bucket from a goal tending call and the Polo crowd went wild. That motivated the Bobcats and they got to work. Shoe hit, then Hall and Rogers put back offensive rebounds to score and just like that the Bobcats were up 33 to 25. Polo's coach wanted to have a chat with his boys. Polo came out of the huddle and stole the ball to score, but Hall answered right back with a bucket. The Panthers scored, but Miller put in a free-throw and Braymer ended the quarter up 36 to 29.

You could hear Coach Mallory say, "Let's go win this game boys." Braymer listened and went on a run in the 4th. Hall and Atherton hit, then Hall swooped around and hit an under the basket lay-up making his Bobcat fans very happy. O'Dell put one in to find the Bobcats comfortably at 44 to 29. Polo's coach decided to talk to his boys again. O'Dell came out of the huddle and hit, then Miller went in for the dunk and the Braymer crowd went wild. Polo tried to stage a comeback and hit a bucket, then swished 2 threes on their end. Hall got an offensive rebound and put it in for his 22nd point of the game. Atherton took it end to end to score and the put in 2 free-throws on his next drive. Polo score once more but Braymer took home this victory 56 to 39.