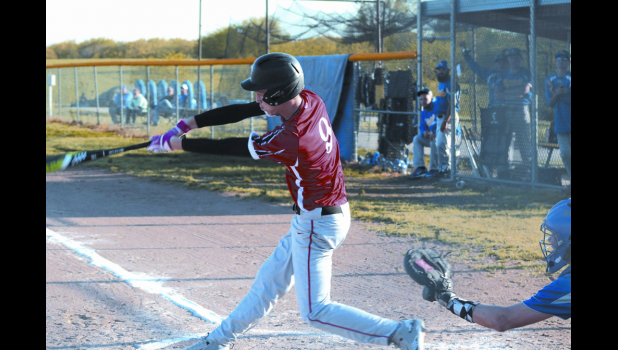 Rogers drove in 4 RBI's to lead the Braymer Bobcats defeat over Sweet Springs 16 to 5.

Shoe led the Bobcats off in the second with a triple. K. O'Dell bunted and scored Shoe to put the Cats on the board. In the third inning Braymer's bats were smoking hot. Gladieux got to first on an error. Miller doubled on a hit to center field. T. O'Dell hits a line drive to center field to score Gladieux and Miller. Shoe hit a hard ground ball and reached base on an error. Wiedmier walked to load the bases. K. O'Dell reached base on a fly-ball error and scored T. O'Dell. Rogers singled on a line drive to center to score Shoe and Wiedmier. Gladieux doubled on a fly ball to right field to score O'Dell. Rogers stole home to score the final run of the inning. Braymer took the lead 8 to 3.

The Bobcats started the 4th inning with T. O'Dell reaching base on a fly-ball error. Shoe doubled on a fly ball to center. Wiedmier reaches first on a pop-fly error. Shoe advance to 3rd base on a steal and Wiedmier stole 2nd. Braymer left these two on base and were scoreless in the 4th.

Braymer started the 5th with McCulley and Rogers reaching base on walks. Gladieux singled on a fly ball to center scoring McCulley. Miller was hit by the pitcher to reach 1st. T. O'Dell singled to score Rogers to end the inning with 10. Sweet Springs scored one run in the 5th. Braymer went on a scoring run again in the 6th inning. K. O'Dell walked. Hall singled to right field. McCulley walked. Rogers doubled on a fly ball to center to score Hall and McCulley. Gladieux made it to first by getting hit by the pitcher. Miller grounded out to 3rd but scored Rogers. T. O'Dell reached base on a fly-ball error in the right field and scored Gladieux. Shoe reached base on a ground ball error by the third baseman and scored T. O'Dell. Shoe stole second. Shoe then stole third on an error by the 3rd baseman and was able to score on the same error to end the scoring for the sixth inning. Braymer now lead 16 to 4. Sweet Springs scored with a triple hit to score Sims. Braymer won the game 16 to 5.