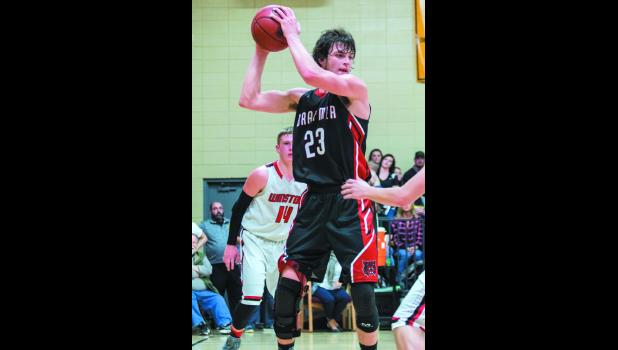 Braymer had 2 agendas on Saturday afternoon. One was to win the District Championship and the other was to avenge the loss of 2 years ago in the regional game against Winston. The stage was set. Some of the gym had red and more of the gym had black for the black-out that the Bobcats had decided on. Winston's crowd was loud, but Bobcat fans bring some of the loudest crowds there are.

Braymer needed to put on some heat and that they did. Winston scored the first bucket, but Atherton, Rogers and O'Dell scored for the Bobcats. Coach Lewis decided he needed to talk to his boys because now Braymer had the lead 15 to 8 with 4:24 left in the second quarter. Well, Miller and O'Dell swished 3's and Rogers hit a bucket. Winston scored a bucket and 2 free-throws. At half, Braymer went into the locker room up 23 to 12 and things were looking good for the Bobcats.

Third quarter found the Bobcats still on fire, with Rogers hitting a bucket, then Miller swished a 3. O'Dell scored and Miller hit a free-throw. Winston had scored 5 points at this time. Atherton sunk a 3. Winston put on full court pressure and staged a come back scoring the next 9 points. At the end of 3, Braymer still held onto an 8 point lead.

In the fourth, Winston pulled within 4 with 2 quick buckets and Winston's crowd started to get loud again. Hall and Rogers extended the lead back out to 8 with their scoring. O'Dell added to the lead with 2 free-throws. Winston scored but Shoe answered with a bucket. Shoe fouled out on the next drive down and Winston hit the free-throws. Hall was fouled on his way up to the basket. He missed his free-throws, but took the ball in for a shot off the rebound. Winston's Lewis brothers each sunk a 3. Hall scored and Miller hit a free-throw. With 1:11 left in the game, Braymer was leading 45 to 40. Miller hit the next bucket. Winston's 2nd starter had to go to the bench with 5 fouls and O'Dell sunk the free-throws. Braymer's lead was now extended to 9 with 36.9 seconds left. Winston hit another 3 to shorten the lead to 6 with 30.9 seconds left. Winston had to foul to try and get the ball back. O'Dell sunk 2 free-throws on two different fouls. Winston's 3rd starter had to go to the bench with 5 fouls and Hall sunk his 2 free-throws. Winston came down and shot a last ditch effort 3 and Hall rebounded and passed up to his double trouble pal and Miller put the icing on the cake with a slam dunk to end the game.

When asking Coach Mallory what he had to say about the game, he said, "It was a great team effort. Everyone really stepped up and filled their role. And they played exceptional defense. "Well Coach Mallory, there are quite a few people that think you have done an exceptional job with these boys. Thank you for that." Braymer captured the District 13 crown and moves on to sectional play against Worth County on Tuesday afternoon at 3 p.m. Come out and cheer loud for these boys. They are certainly worth your afternoon.