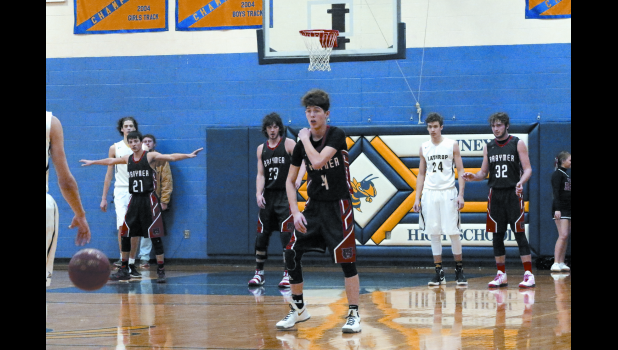 Braymer faced Lathrop for the 3rd place trophy at the Hamilton Tournament on Saturday afternoon.

Miller started the scoring with a put back rebound. Miller then swished two 3's and Hall put in a reverse lay-up. O'Dell swished a 3. Miller stole the ball and put in 2 free-throws after being fouled. O'Dell swished another 3 and Braymer took the lead after 1, 18 to 12.

Miller and Hall each put in a free-throw to start the Cats scoring in the second. Miller swished another 3. Trenton pulled ahead after 3 minutes in the second quarter 24 to 23. Miller connected with another 3 and then a 2 after Hall blocked a shot on Trenton's end. Hall put back an offensive rebound. Scoring was back and forth in the quarter, but Trenton held the lead at half 32 to 30.

Hall scored 1st in the 3rd quarter to tie the game back up. Hall and O'Dell put in a free-throw. O'Dell then put in 2. Hall put in 2 buckets, then 2 free-throws and pulled the Cats with in 2. Turnovers plagued the Bobcats and the Mules went on a scoring spree and pulled ahead 54 to 43 at the end of 3.

Miller swished a couple of 3's in the 4th quarter. Hall put in a free-throw. T. O'Dell put back an offensive rebound and then swished another basket from the side. Kimberling made a free-throw to complete the scoring for the Cats in the 4th. Final score 79 to 55.

Braymer faces Stanberry on Monday night at home. Come out and cheer for your Braymer Bobcats.