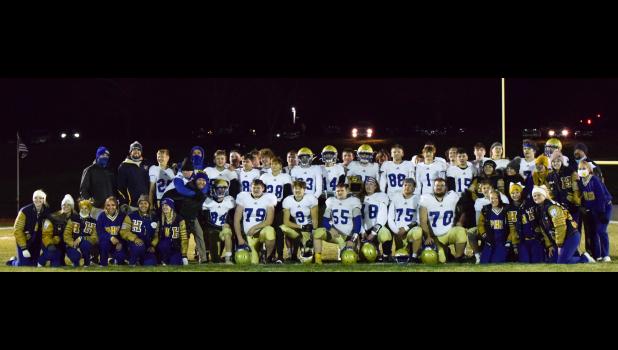 The Penney High Hornets traveled to Princeton on Friday, Nov. 13th, to face the Princeton Tigers with Mercer for the Class 1, District 7 Championship, and a date in the State Quarterfinals on November 21st. Everybody knew it was going to be bad luck for one team, being Friday the 13th.

The Tigers got the opening kickoff on this cold night, and quickly put up the game's first score on a 38-yard run. The Hornets stopped the 2-point conversion run attempt, but trailed 0-6, just 1 minute and 43 seconds into the game. With 5:47 remaining in the opening quarter, Sawyer Morrow ran it in from 3 yards out. Morrow's extra point kick gave Hamilton a 7-6 lead.

That score remained into the 2nd quarter. Princeton intercepted a Hornet pass and took over on their own 30-yard line with 10:29 on the clock. The Tigers moved the ball to the Penney 30-yard line, and were facing a 4th and 6. The Hornet defense got the ball back when they stopped the 4th down play with 2:27 left in the half. Hamilton moved the ball to the Princeton 17-yard line with 2 seconds on the clock. Morrow's attempt for a 34-yard field goal was good, and the Hornets led 10-6 at the intermission.

Neither team was able to sustain a scoring drive early in the 3rd quarter. With 5:14 remaining in the 3rd quarter, Penney defensive back Nate Wyckoff intercepted a Tiger pass in Hamilton territory. Unfortunately, the Hornets were unable to turn it into points.

The score remained 10-6 heading into the 4th period. Princeton attempted a 4th and 1 on their own 30-yard line, but again the Hornet defense stopped them with 9:51 to go in the game. Penney would continue their drive after making a successful 4th and 2 play. With 6:34 on the clock, Hamilton failed to make 4 yards on a 4th down play at the Tiger 7-yard line, and turned the ball over on downs at that point. Princeton was able to move the ball on their next series, but ended up turning the ball over when Wyckoff intercepted his second pass of the game on the Hornet 40-yard line with 4:24 left in the contest. The Tigers would soon get the ball back at the Princeton 39-yard line on a fumble recovery with 3:32 on the clock.

One of the biggest plays of the game occurred with 2:40 left when Morrow dislodged the pig skin from the ball carrier, and then recovered it before it went out of bounds at the Tiger 45-yard line. Four plays later, on 4th down and 2 yards to go at the Princeton 37-yard line, Tucker Ross ran up the middle for a first down to seal the 10-6 victory for Hamilton.

Coach Caleb Obert was extremely happy with the way his team performed. "I am super proud of our team going into Princeton and taking on a red-hot team. Our defense played great, especially in the 2nd half."

This was a hard fought, defensive battle all night long, as each team committed 3 turnovers. The Hornets ran 67 plays for 216 yards, of which 169 were rushing yards. The Tigers ran 53 plays for 157 yards, 138 on the ground. Penney converted 13 first downs, were 5 of 13 on third downs, and 2 for 4 on fourth down plays.

Princeton managed 10 first downs, were 2 for 10 on third down, and went 0 for 2 on fourth down. Corbin Henderson led Hamilton in tackles with 9 total, including 2 tackles for loss (tfl). Ross recorded 7 tackles (3 tfl), and Fisher Nixdorf made 7 tackles, including 4 (tfl). Jared Potts was also in on 7 total tackles (1 tfl), as was Anthony Prater. Silas Prothero made 2 solo and 3 assisted tackles, and Andrew Rich registered 4 tackles (2 tfl). Losson Park had 4 total tackles, and Wyckoff added 3 tackles to his 2 interceptions. Morrow recorded 3 solo tackles, including 1 (tfl), and Ethan Trosper and Brayden Reynolds each had 2 solo tackles. Clay Finch had 1 tackle, and Austin Snow assisted on 1 tackle. Morrow ran for 122 yards on 31 carries, with 1 TD. Ross carried the ball 17 times for 33 yards, and Henderson ran the ball twice for 9 yards. Ross completed 4 passes in 9 attempts for 47 yards. Rich caught 2 passes for 17 yards, Morrow 1 for 16 yards, and Potts 1 for 14 yards. Rich returned 1 kickoff 6 yards, and Morrow averaged 34 yards on 2 punts, with 1 inside the 20-yard line.

The Hornets will host familiar KCI foe Mid-Buchanan in the quarterfinals at 1:00 on Saturday, November 21st. The undefeated Dragons are ranked No. 1 in Class 1 in the State, and are averaging 54.3 points per game, while allowing just 7.3 points per contest. Penney is averaging 30.8 points/game, and are allowing 25.3 points per outing.

Of course, both teams have several common opponents since they are both from the same conference. Hamilton lost to East Buchanan 36-60, but defeated Lathrop 40-16, Lawson 40-12, North Platte 48-13, and West Platte 49-14.